Osmos HD. There won’t be very many games in my collection. Here is one exception. Osmos is a contemplative, dynamic, strategic game. By emitting matter you push a little amoeba into the opposite direction – sometimes you control a planet or star. Get big, eat the others. Do not get eaten or absorbed. Beautiful graphics. The game is also Game Center enabled, which injects a bit of intelligence and intent into the opposite cells. Type-Writer is almost too simple to be good. But as soon as you engage in the lost type writing mood, and feel how you are slowed down by the deliberate friction of the user interface, it becomes a creative challenge to create cards with meaning or – according to the public gallery – ancient “ASCII art”. 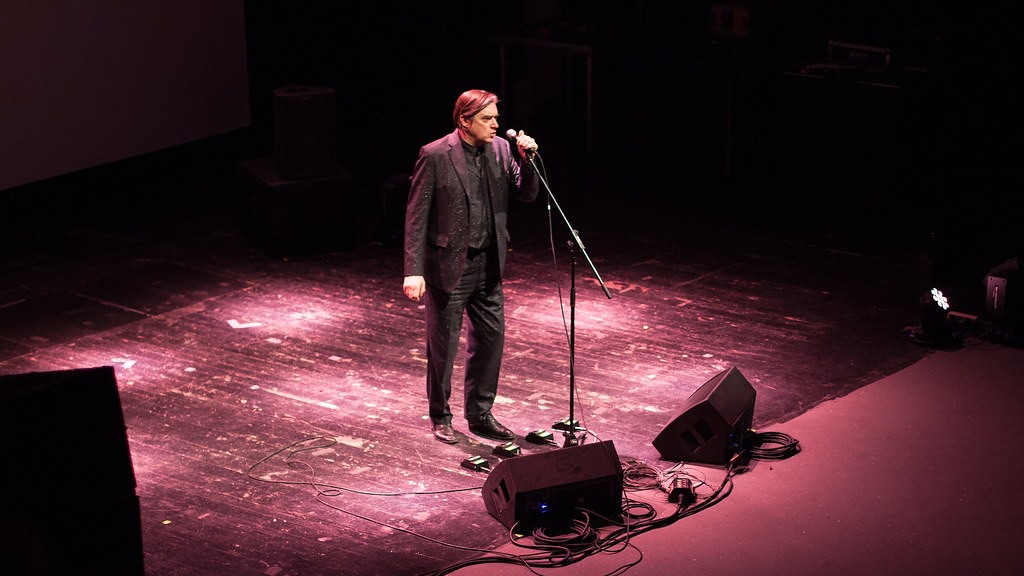 Last week and for the second time I went to Belgrade for attending the resonate conference (which is all about "the position of technology in art and culture"). Here are my loose notes from it. (For some great german notes, checkout Heikes review.)

Pauline Drescher talked about the Cindkid Festival, an annual gig taking place in Amsterdam. Its mission reads as follow:

Some of the installations Pauline showcased were a Puppet Parade, a StopMotion piece you could star in, light graffiti, enriched plants, and much more.

My favorite piece was this Augmented Shadow by Joon Moon.

Then there was the ecal Open Controllers Project, which

They use standard products from IKEA and stuff devices in their bellies to create simple and effective controllers.

Adam Magyar's work was the opener, I found his real world scans highly fascinating. Also liked these high speed shots taken from the inside of arriving trains. Inspired by his work, we tried our own little scans, using Poloska and tagtool, just for fun. Heheh.

I sadly missed the better part of Lauren McCarthy's presentation, I really like her positive approach to take social media as a given and play around with it, mixing it with data analysis and often holding up the mirror to our own faces. This is us+, an g+ plugin she did together with Kyle McDonald.

More bits: Kortex by Joshua Batty lets you create audio based visuals in cool way. The Generative Detective says it all. I want conductive markers now. mrdoob told us how ctrl-click on the available resolution list in the mac os settings panel solves your projector problems and that I missed this. And Mickey Rooney does the impossible thing in Martin Arnold's Cinemnesis, thx to Jack Schulze for the heads up and a very entertaing talk.

I did miss most of the LIVE part of resonate (concerts at night), but I managed to witness Blixa Bargeld doing his schtick. A keeper. Additionally we got invited to a former brick factory which is now some art/music/event place which was hard to find, even for our taxi driver. And what happened there surely stayed there.

Yes, back to Belgrade for #res16. Ah, and here's a list of nice quotes from the festival, too. The echo in tunnels has, until now, made the emergency communication over loudspeaker virtually impossible. Now scientist are exploring possibilities to make such instructions clearer. They are developing techniques to time-aligned the signals so as the sound waves don’t cancel out each other.

Another case of the importance of sound for communication. Flashing lights will get the attention but sound will make it possible to deliver specific instructions which could be a life-saver. Snapseed 2. It seems that google has waited for my recent post on Snapseed 1.6 to release a completely redesigned version of Snapseed.

One item checked off from my wish list: Snapseed contains multiple undo and  multiple redo functionality including “re-adjusting the past”. Impressive. The rest of the redesign is debatable. The current state of the image is displayed full screen – much larger than before, which is good. You can even zoom in further to check the details. As a trade off the tools are accessible via a (+) control button to be revealed as an overlay. A simple GOMS analysis would show that this takes approx. twice as many steps to choose a filter compared to the interaction model in Snapseed 1.6 before. Of course, the filters have been reorganized and a couple of new tools are available. I will update this post when my first impression is no longer dominated by sorrow on the loss of the Grunge module. Right now it feels that Snapseed lost its personality.

After watching Austin Kleon making a blackout poem on live periscope, I thought I give it a try too. I tried different kinds of setups, so far I found the combination of iPad + nootle tripod mount + goriila tripod working best for me (but not perfect yet).

Needs more exploration and definitely conversation. Here's the video of the whole thing.